Do you know how long does it take a dog to digest food? Believe it or not, your furry ball’s mouth does not function the same as ours does. First, dogs have 42 teeth, and have 2000 taste buds, while a human has 32 teeth, with a staggering 10,000 taste buds. The reason there is a huge difference between how dogs and humans digest food is due to the difference in species.

While humans can enjoy the food they eat, dogs find and eat food quickly. Basically, taste is the least of a concern for dogs. Additionally, a dog’s teeth are not meant to grind food, which means they mostly swallow their food.

For a dog, the mouth serves as a gateway to getting food down their throat, quickly and efficiently. But, if you are wondering how a dog digests its food, and how long it takes to do so, then read on to learn more. 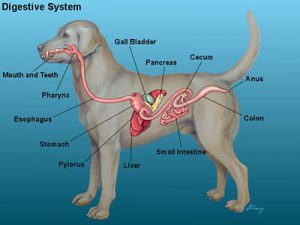 Upon chewing food, humans produce saliva, which contains an enzyme that breaks down food before it reaches the stomach. However, this is not the case with dogs, as all the work is done by the stomach.

Apart from breaking down food, a dog’s stomach wall also has glands that produce acids. But what is interesting is that the acids here are far stronger, in fact, ten times stronger than those found in our stomach. The reason the acid is stronger than ours is that dogs eat anything from meat, bone, to kibble and grass. As for how long it takes for the food to be broken down in a dog’s stomach, it can take approximately eight hours or so, after which it is passed on to the small intestine.

Once the broken down food has made its way to the small intestine, it will remain there for at least two days, depending on the meal of course. Simple foods like corn will pass in a couple of hours, but complex foods will take longer. Once the small intestine has done its job, whatever remains is then passed on to the large intestine where it is processed further. Once that is done, it is moved to the colon.

In all, from the moment food goes down a dog’s throat to the time it is removed from the body as waste, the entire process takes from 10 hours to a couple of days.

Even though the digestion process works as explained above, there are various factors that affect how food is processed and then evacuated. Some factors are:

Dry dog food can take anywhere between eight to ten hours to be digested. As for wet dog food, it is digested much quicker, normally between four to six hours.

If the dog isn’t healthy, is underweight/overweight, has pre-existing conditions, then the digestion process could be altered, even drastically. To better understand a dog’s digestion, the key is to assess its waste.

What does a Dog’s neurontin 600 mg Waste Reveal about its Digestion?

A lot can be said about a dog’s digestion through its excrement, which does not differ from how it is with humans. If there are any health or digestion problems, it can be uncovered by examining a dog’s excrement.

If a dog does not get all the nutrients it needs, then its health is at risk. Some signs of improper digestion are:

If a dog has any of these problems, then it is not a good sign. Also, the frequency of waste eliminated also shows how quickly a dog digests its food.

Check out some worth buying dog foods that are easy to digest.

Are there Foods a Dog Can’t Digest?

Yes, there are in fact many foods that a dog cannot digest properly. Dogs find it difficult to digest foods rich in carbohydrates. The reason behind this lies in a dog’s inability to break down the carbohydrates, as they lack the enzymes needed to do as, as already mentioned earlier.

Foods that dogs find hard or poisonous to digest include:

When consumed, even in small quantities, these foods could severely impact a dog’s health in a negative way.

A dog’s jaw can only move in an up and down motion, which explains why they cannot grind their food as humans do.

Since dogs produce more acids than humans, and also because they share some similarities with humans regarding digestion, they can get a heartburn too. Although, they can be given over-the-counter antacids after talking to a vet.

Dogs’ digestive systems accommodate animal fat, so they do not have to worry about cholesterol, as its effect on their heart is not the same as ours.

If you are a dog owner, you should now have a better understanding of your dog’s digestion. Moreover, you also know what foods are great for them and whatnot. Keeping this information in mind, you will be able to take better care of them, without being clueless all the time.

Even if you are a seasoned veteran when it comes to dogs, there is really no harm in taking an interest in what goes in their tummies. If your dog is unhappy, it will be miserable all the time. To prevent this from happening, you will need to go above and beyond the call of duty to ensure they eat right, all the while taking into consideration all those factors that affect its digestion. This is especially true if you are traveling with your dog. If you play your cards right, you will notice your dog will not only be more active, but it will be far more cooperative, especially when you are moving from one place to another.