Pregnancy is always a time to celebrate, but with it, also comes the responsibility of being aware of the gestation period, even with dogs! Like any first-timer, you probably have a bunch of questions in mind when it comes to your dog giving birth, like how long is the gestation period for a dog, how long are dogs pregnant, what are the signs of dog pregnancy, what to expect during a dog pregnancy, and more.

Dogs can go into heat, or estrus, twice a year. For us to better understand the gestation period in dogs, we need to take a look at the female dog reproductive cycle.

How Long is The Gestation Period for A Dog

There are four stages to the reproductive cycle in a female dog, which are proestrus, estrus, diestrus, and anestrus.

Proestrus is the first stage where females begin to attract males and last for approximately 9 days. Despite males becoming attracted towards females in this reproductive stage, the females will reject the onset of mating until the estrus stage. The signs of proestrus are bloody discharge and swelling of the vulva.

Estrus is the second stage of the female dog’s reproductive cycle and can last up to 3 to 4 days or 7 to 11 days depending on the female’s hormones. During this stage, the female now becomes openly receptive to the male. Some symptoms of the estrus stage are a softer, enlarged vulva and decreased discharge that is slightly lighter in color than during the proestrus stage.

The third stage to the reproductive cycle is diestrus and usually happens on the 14th day. The dog’s heat is complete by this stage when swelling and discharge has completely stopped.

The final stage is anestrus and lasts for around six months until the proestrus stage begins again. 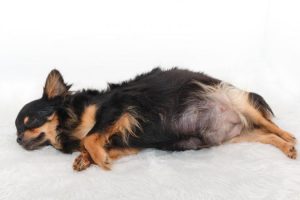 The Gestation Period in Dogs

Hormone measurements are often used in the form of vaginal smears and blood tests to more accurately determine the potential due date.

In the first month, the embryo will travel towards the uterine horns and become embedded into the uterine lining around the 16th day of conception. By the 22nd day, the fetus begins to take shape, and by days 28-30, the fetal heartbeats should be detectable through ultrasound.

During the initial three weeks, symptoms are not usually as evident, but some symptoms to note during the first month of the gestation period are:

The second month moves even faster, and during this period, the eyelids begin to form by day 32 and the paws by day 35. The claws become visible by the 40th day, and on the 45th day, the coat and skeleton are also visible.

X-rays are usually performed on the 50th day onwards, as by this time the number of puppies can be detected.

Some symptoms during the second month of pregnancy include:

By this month, the female dog is about ready to whelp as the puppy development stage is nearly complete by the 58th – 60th day and begin to move to the birth canal. Some symptoms that occur during the last few days of pregnancy are: 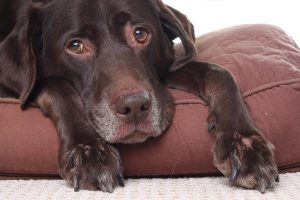 How Long Does Dog Labor Last?

After the gestation period, labor begins in three initial stages.

The first stage will last 12 – 24 hours and contractions will occur. Although not visible, some signs are:

During the second stage, puppies are delivered and can take up to 24 hours, delivering one puppy at a time. It is essential to know the number of expected puppies, as each delivery should not last more than 2 hours and occur every 30-60 minutes. Knowing the number of expected puppies will help the owner know when the delivery is done, and to call a vet if the dog is having difficulty delivering the pups.

The third and final stage is when the placenta has been delivered.

You should immediately call your veterinarian if the labor is taking more than 24 hours, or it takes more than 2 hours between the delivery of each puppy. These could be signs of complications and could risk the lives of both the pregnant female and the puppies inside of the womb. 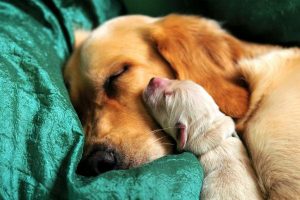 Will the pregnant female remove the membranes?

In most cases, the female will remove the membranes and cut the umbilical cord. If she has become restless and tired, the owner can gently remove the membrane from the puppy’s nose and mouth and begin breathing and looking for a nipple immediately afterward.

What should I feed my pregnant dog?

If your pregnant dog is on a raw diet, it is recommended that you switch gradually to high-quality kibble, and increase the amount to about 50 percent but in smaller quantities and more frequently throughout the day.

What do I need to prepare for my dog’s labor?

You may prepare the following for your dog’s labor to ensure that everything is prepared and  that your female dog is comfortable:

How do I know the newborn puppies are growing properly?

It’s important that you get your newborn puppies checked by your veterinarian to make sure their health is in check. As the puppies grow, you will also want to observe whether they are following the puppy growth chart and developing properly in terms of their age and weight.