Why do dogs sneeze when they play? Is it to clear their air passages as one might imagine? Or is there another meaning to this gesture? It could be a communication related to playing and unrelated to their health. Your interpretation as the dog owner, dog sitter or minder needs to be considered and appropriate. Here are some notes to consider when you observe this behavior in your dog.

Sneezing and other canine signals

Whether you own a dog or look after one as a pet sitter you will not fail to notice that the dog’s gestures and behavior can be interpreted in different ways.

“Sneezing is a natural protective reflex and is generally nothing to worry about. However, if your dog continues to sneeze or seems unwell in any way then you should contact your vet for further advice.”

Physical reasons for the sneezing related to the health of the dog could include irritation in the nasal passages or seasonal allergies. Persistent sneezing could in extreme cases be caused by nasal mites. If any of these are a concern a vet should be consulted.

If the sneezing generally happens with greater frequency in particular months (e.g. Spring and summer months) then it may be related to seasonal allergens. Seasonal allergies can be treated with a variety of medicines and herbal treatments such as herbal soothing skin treatments and allergy immune supplements for dogs. Ideally, any medication or supplement should be given to your dog under your vet’s instructions.

When you suspect that sneezing is not a physical reaction, it could be a behavioral signal, to communicate something to other dogs.

Some people view this kind of sneezing as one of the ‘dog calming signals’ that dogs learn as part of a vocabulary for communication with other dogs.

What are the dog calming signals? 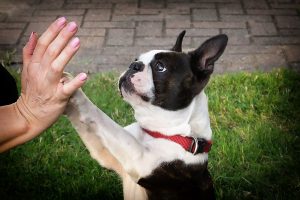 While Rugaas has stated that she believes there are at least 30 dog calming signals, the most recognized and documented are the ones that dogs use to communicate their peaceful ‘calming’ intentions, like:

Socializing a dog and learning the canine language

Socializing dogs with other dogs is really important. This is especially important and impactful when dogs are young.

The experts tell us that this will set them up for life and help them get on not only with other dogs but with humans also.

They learn from each other how they must behave and communicate with other dogs, large or small, young or old. It’s a protocol best learned young.

And there are a few clues that are worth understanding such as why dogs appear to bow to each other on first sighting or another dog.

It might seem a secret language to the uninitiated, but the messages are not as subtle as you might think.

Some dog behaviorists believe these are instinctive pack signals to initiate a cooperative stance with other dogs, much like a human offering a hand for a handshake or working for peaceful collaboration.

They may have inherited this way of communicating with each other as an instinctive or learned body language, to prevent aggressive or wild behavior.

It is a continuous behavioral inheritance visible often even as they play in their litter learning from parents and later when socializing with other dogs young and old.

The puppy litter is a training ground


This is one of the main reasons puppies need to stay with their litter for an essential period. They should not be removed from their litter too early. And then they must be socialized with other dogs to bed down their understanding of this language.

They need to become fluent in their language early on, failing in this they are in danger of becoming social outcasts within their own canine communities.

Why is dog socialization so important?

Dogs need to be socialised. Not socialising puppies properly can create poor understanding in canine communications which can lead to unexpected and unpredictable responses from the dog when they find themselves in situations they do not recognise. They become fearful and defensive reacting randomly to any advances by other dogs, however harmless the other dog.

We hear about dogs “going crazy” when they see another dog. Or how some dogs are so used to their own unique canine status in their family or human pack. They might act as an “only dog” refusing to accept another dog in the same room as them or even in the house.

Learning to socialize is as much about becoming familiar with other dog behaviors as about learning calming signals from dogs who have already been socialized.

Moreover, it is the breeder’s or owner’s duty to ensure socialization happens early on and for a sufficient period with older and younger, smaller and larger dogs to ensure they have a safe and happy future.

Dogs that are not properly socialized have a very hard time adjusting to normal standards of behavior and may remain forever unpredictable and can, of course, be dangerous, not just to other dogs but humans too.

Dog sitters should discuss the dog’s health and any required routine medication before taking over care of the dog and being left solely in charge.

You’ll find the previous experience with dogs enormously helpful in understanding what their behavior might mean. However, you need to be mindful of the pet’s individual personality when establishing your leadership, especially if you are in charge of more than one dog in your human and canine pack.

Carefully assessing the behaviors and actions of your dog with these ideas in mind can help you better understand the range of communications we see them engage in with us and with each other. This is a glimpse into the world of canine language, enjoyable to watch in both young and especially older more practiced dogs.

Dog leadership is important whether you are the dog’s owner or a pet sitter looking after one or more canine charges.

Dog leadership can be learned in puppy training classes (both owner and dog tend to benefit from such training courses) and also on dedicated courses such as new forms of interactive dog leadership courses. Such a course can help even experienced sitters to build a relationship with an unknown dog and are worth investigating.

If you are a pet sitter looking after single or multiple dogs it is important to consider all the issues that might cause the dog sneezing or other signals before you react or take action.

Author Bio: By Lamia Walker dog lover, dogsitter and CEO of HouseSitMatch.com helping you find experienced and checked housesitters and petsitters for when you travel.