The Scottish neurontin india Fold Cat has featured prominently in the media recently, though not always for the right reasons. While their popularity has increased thanks to celebrities like Taylor Swift and Ed Sheeran owning them, real concerns are being raised about their health.

The Scottish Fold has experienced an unprecedented surge in its fan base in recent times and a search on Instagram for #scottishfold reveals several million posts. Many people are attracted to their unique appearance, though are completely unaware of the health conditions associated with the way they look.

In fact, the British Veterinary Association (BVA) has advised against the breeding of this controversial breed due to their associated health issues. They are instead promoting the breeding and adoption of cats with less ‘quirky’ appearances, such as the Domestic Short Hair.

For many, the appeal of the Scottish Fold is its ‘cute’, owl-like face and its endearing folded over ears. However, the gene that makes their ears fold also affects the cartilage and joints all over their body and results in issues such as arthritis from a very young age. Many are asking, where do we draw the line when it comes to breeding ‘extreme’ examples of a species? 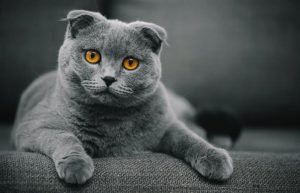 A barn cat named ‘Susie’ was born with the mutation that made her ears folded. She had a litter, several of whom shared the same mutation. A neighbor of the farmer named William Ross took on one of the kittens and registered the breed, beginning to breed them with the help of a geneticist.

Initially, the breed was first called ‘Lops’ or ‘Lop-eared’ thanks to the characteristic shape of their ears, but this was changed to ‘Scottish Fold’ in the mid-1960s.

Not long after their creation, people began to notice issues with the breed and they were not allowed to be shown. There was concern over a large number of joint deformities that was present in the population as well as high levels of deafness, among other things.

The GCCF (Governing Council of the Cat Fancy) in the UK stopped registering these cats in the 1970s and have refused to register them since.

In the 1970s, several Scottish Folds cats were exported to America for research purposes but when the project ended, they were re-homed and some were bred with local breeds such as American Shorthairs.

Interestingly, while it is common knowledge that this breed suffers from a number of health issues, this has not dented their popularity and they remain a very expensive breed to buy and remain in high demand.

Scottish Folds are all born looking the same, but at about three weeks old their characteristic ear shape will begin to show. While the original cats only had one ear fold, nowadays it is not unusual for cats to have two or three in each ear, with ears sometimes laying completely flat against their heads.

Some individuals will be born without folded ears and they are known as ‘straights’. Their heads are circular and their eyes are large and round, adding to their ‘owly’ charm.

In fact, they are round all over, a feature which many find appealing. Their body is built in good proportion and is medium in size. Their legs are relatively short and they have rounded feet and neat, little toes.

Their coat is variable, with individuals having long or short-haired coats in a variety of colours. Their fur is dense and soft, ensuring they are lovely and soft to stroke. While the original Scottish Fold was white in colour, today we see breed members that can be grey, tabby, ginger, brown and plenty of other colours.

Scottish Folds have a lovely and endearing temperament and will form close attachments to their owners. They like to be around people and do not hold back when it comes to showing affection.

Trusting and loyal, they will listen closely to their owners and will be attentive to their feeling and emotions. Many describe them as ‘kitten-like’ even when fully-grown and enjoy the fact that they have quite confident and cheeky personalities. 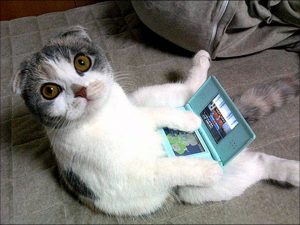 Creatures of habit, the Scottish Fold benefits from having a set schedule and routine and does not enjoy living in an environment that is constantly changing or being surrounded by too much chaos.

A cat that does not like to be in its own company for too long, the Scottish Fold can be prone to separation anxiety and is not suited to a home where it would be left to its own devices for the majority of the day.

Playful and intelligent, this breed will never shy away from a new game or puzzle and enjoys being given the opportunity to test their mind and learn new skills. They can become bored and anxious if not provided with enough mental stimulation and, if kept indoors, require an environment that is enriched with lots of toys and activities.

They particularly enjoy climbing cat trees and hiding away in cardboard boxes. Scottish Folds are particularly known for using their paws to problem solve and interact with their environment, pawing and swiping at just about everything in their sight!

Typically, a Scottish Fold will get on well with other household pets, though it is important that they are socialized with them when young, otherwise, they may not tolerate them. As they dislike being alone, another pet can make a good companion in cases where owners are not around 24/7.

While it is perfectly fine for a Scottish Fold to have outdoor access, many owners prefer to keep these Pedigrees indoors. They can adapt well to being walked on a harness and relish the opportunity to spend some time in the fresh air when possible.

It is not advised that any breed member that is deaf be allowed outside unsupervised as they are at high risk for being hit by a car.

The grooming requirements of the Scottish Fold will depend on their fur length and those with longer coats will need to be brushed every couple of days, with owners focusing on the spots where tangles like to form, such as under the armpits and on the belly.

These cats shed a reasonable amount and are certainly not hypoallergenic. For those house-proud owners who like to keep their homes pristine, they may wish to choose a breed that sheds less!

Some Scottish Folds are prone to chronic ear infections and can be predisposed to ear mites. Owners should introduce ear cleaning from a young age and ears can be cleaned on a weekly basis. In terms of feeding requirements, here is the best cat food for Scottish Folds.

When it comes to the general health of the Scottish Fold, the main concern is that the gene which causes their ears to be folded also causes a condition called ‘Osteochondrodysplasia’ (OCD).

Without exception, any breed members with folded ears are affected by OCD. Those that are heterozygous (only carry one of the genes) tend to be affected to a lesser extent and some do not display obvious symptoms. 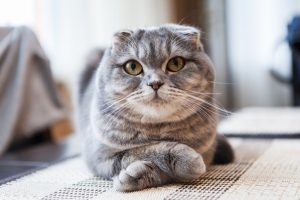 Those with two copies of the gene (homozygous) are severely affected, to the point where their quality of life is drastically compromised. Their joints are malformed and they experience mobility issues and pain from an early age.

While reputable breeders will have procedures in place so they do not produce homozygous cats, breeding of the Scottish Fold remains divisive as experts are unsure as to what level the heterozygous cats are impacted and whether or not it is ethical to continue breeding them.

As well as being prone to OCD, Scottish Folds can also suffer from Hypertrophic Cardiomyopathy (HCM) and Polycystic Kidney Disease (PKD).

The average Sottish Fold will live into its early teens, although this varies considerably between individuals and will hinge on whether they are homozygous or heterozygous for the gene which is linked to their folded ears.

A distinctive looking cat with a contentious history, the Scottish Fold has certainly ruffled some feathers in the few decades it has been around. While breed advocates argue that responsible breeding can reduce the health issues associated with the breed, those opposed to the existence of the Scottish Fold raise concerns that to continue to breed them would be unethical and would cause unnecessary suffering.

All will agree that Scottish Folds should be monitored closely with frequent vet checks and x-rays and that any arthritis should be managed with effective pain relief at all times.

Author bio: Dr. Kate has always had an affinity for cats, so it was a short step for her to become a cat writer. Kate’s longtime interest is to help people to better communicate with their pet companions, and in doing so, to help them to strengthen their relationships with their cats and dogs.